From April 4th till April 8th, Asian film lovers will be filling up the rooms of De Balie in Amsterdam: CinemAsia Filmfestival will take place for the fifth time. One of the films premiering at this biannual festival, is Onze Band met Rijst, by CinemAsia Filmlab winner Ari Purnama (Bandung, 1981). Who is this Indonesian film maker? 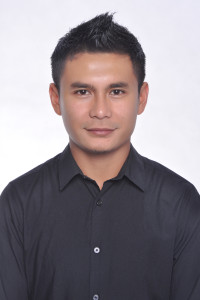 Ari Purnama comes from an entrepreneurial family. His mother plays a central role in it. Ari did his bachelor in Communication Science and came to the Netherlands in 2009 for a research master’s degree in Cultural Studies. Ari believes in “the capacity of cinema as an emancipatory and powerful storytelling medium, therefore making film is more than a passion for me.” I interviewed him this week, in between the final editing of his film.

A nursing home
The synopsis of Ari Purnama’s short, fictional film is intriguing: “On her 81rstbirthday, an Indo-Dutch (grand)mother named Jolanda discovers the news that her three children have decided to put her in a nursing home. Fearing that she might upset the children, she accepts the decision, even though she’s suffering inside. Her agony leads her to retaliate by undertaking a decision that will shock her children to death. Revenge is sweet, but a silent revenge is a sweeter one!”

First generation stories
The way (even) Indo-Dutch families care for their elderly, clearly differs from the Indonesian way. How does Ari view the Indo-Dutch community in the Netherlands? “I am always interested in hearing the stories about leaving Indonesia and coming here. But it is often hard to talk to them on a personal level. You don’t get in-depth answers and it’s hard to get inside the Indo-Dutch communities. I love the distinctiveness of that culture, but we hardly hear about this in Indonesia.”

Manipulated history
Why should people in Indonesia hear these stories, I ask. “We hardly hear about the activities of the Indo-Dutch community in the Netherlands, or the stories of the first Indo-Dutch generation. Unless you have these family members, of course. The younger generation needs to hear both sides of the story, it’s important because during the Soekarno and Soeharto’s times, history was strongly manipulated. It would be beneficial for the newer generation to get insights into this chapter of Indonesia-Netherlands relation.”

The cast
Ari lives in Groningen. Although there are many Indonesian students living there, he points out that there is no big Indo-community like in the west of Holland. “The actors in my film come from all corners of the Netherlands. Even from Ossosch. In terms of background, the cast is quite diverse, but they all have Indonesian roots. Some of them are of mixed descent, and one has a Moluccan background. From all of them, only the protagonist (played by Tante Vera Willemsen) was born in the Dutch East Indies, the rest were born in the Netherlands.”

Lemper
Before we wrap up the interview, I have to ask him The Question: how does Ari like our Indofood? “Haha! Well, I love your version of the lemper. In Indonesia, it is sweet and small. Here, there is more flavor to it and it is a lot longer. Every time I get food, I indulge myself in them. My favourite toko in Groningen? That would be Toko Semarang, on the main street, Gedempte Zuiderdiep. You can choose different dishes and sides, like rendang, and ikan blado, and they warm it up for you. It reminds me of the warung tegal I know back home.”

Why did Ari choose this subject? And: how did a university graduate become a filmmaker? You can read more about Ari Purnama in the April-edition of Moesson-magazine. No desire to wait? Visit http://bacteria.home.xs4all.nl/Day_Two/ for a behind-the-scenes look. Onze band met rijst premieres at CinemAsia on April 5th (“Made in Holland”) and also screens on April 7th.