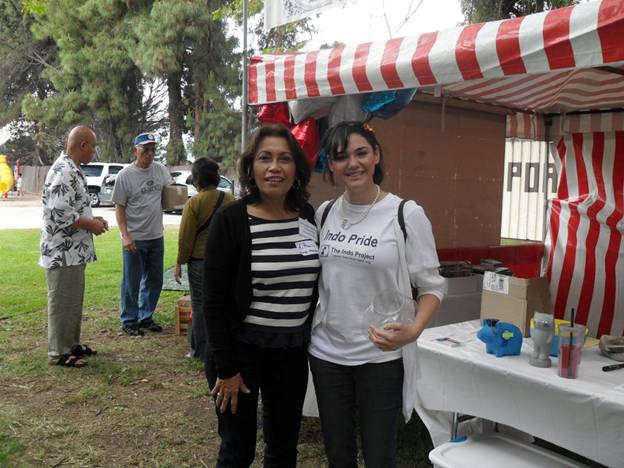 ‘My presence on the TIP board is a step towards bringing Indo youths together.’

Jamie Stern, a third generation Indo, born in 1987 in Santa Monica, California where she still lives. Her Indo roots come from her mother who was born in Semarang, Indonesia in 1958. After Jamie’s mother’s birth, her family repatriated to The Netherlands where they spent four years before immigrating to the United States in 1962. Jamie is currently finishing her Masters degree in Cultural Geography. For the past five years she has worked as an aviation meteorologist and serves as a board member for The Indo Project (TIP); an international nonprofit organization that promotes Indo history and culture in the English language. I speak with Jamie about TIP and the ethnographic research to ‘fully describe what has happened to the Indos and where they are today; geographically as well as within society’.

A rich mixed heritage
Jamie is TIP’s geography academic and one of their researchers. As the youngest member on the board, she explains to me that she reaches out to other young Indos. Jamie: ‘Though being Indo often means having a very rich mixed heritage, mine is further mixed by the fact that I am half Indo. My other half is Jewish from my father’s side, though I most closely identify with the Indos and regard myself as an Indo-American.’ Being half Indo is not something Jamie likes to point out because she feel like it diminishes the value of being Indo. However, this is a point that some third and fourth generation Indos in the U.S. become stuck on. Jamie explains: ‘In their eyes, they see that they are only half or only a quarter Indo and therefore do not belong. This is not true!’

The value is to unify our Indo culture by providing an organized legitimate academic source of information that can be used to stimulate further marginalization through generalization.

Why the research?
The research is being conducted with two goals in mind. First of all, it is the final research required for Jamie’s Masters degree. Jamie: ‘It will preserve a standing document in academia that makes available a plethora of statistical and subjective information about the U.S. Indo population.’ Second, it will be available through TIP as a research document for the entire Indo community and global community at large as an opportunity to perpetuate Indo awareness. Jamie: ‘The value is to unify our Indo culture by providing an organized legitimate academic source of information that can be used to stimulate further marginalization through generalization.’ For Jamie it is important to take on the responsibility of documenting the unique Indo culture and preserving it for future generations.

Jamie: ‘Another piece of interesting information coming from the survey – and something to have pride in – are the Indos’ educational accomplishments. Both second and third generations surpass the U.S. national average with Masters and advanced professional degrees.’

Research results so far
At this moment almost nine hundred people from all over the world have completed the research survey. Jamie tells a little bit about the results so far: ‘In the U.S. forty-five percent of the survey responses have come from third-generation Indos. This clearly indicates a surge in heritage and cultural interest by our younger community. Our third generation is very interested in learning more about their heritage but one issue is the language barrier.’ Almost sixty-five percent of this group learned English as their first language. Only five percent of those individuals went on to learn Dutch. This means that sixty percent of them cannot understand the Dutch documentaries on the Indo experience. Jamie adds to this: ‘Almost seventy percent of the third-generation English-speaking group said that they would love to be able to read books and watch films and documentaries about the Indo experience. This brings to surface the necessity for our younger Indo generations to have information accessible in English*.’

My presence on the TIP board is a step towards bringing Indo youths together, sort of bridging the gap that currently exists.

Connected through food
The last subject we discuss is how U.S. Indo youths meet each other typically through family and friends, and through the use of social media like Facebook, Twitter, and YouTube. Jamie: ‘There are no organizations or clubs that I know of in California or in the U.S. that specifically target Indo youths. My presence on the TIP board is a step towards bringing Indo youths together, sort of bridging the gap that currently exists.’ How Indo youths connect to their heritage seems to be somewhat universal, Jamie: ‘Eighty-nine percent of the younger Indos reported that they felt connected through food and meals, and also through family gatherings and listening to stories from their grandparents.’

* Right now, a documentary is a major goal and very high on TIP’s priority list. In order to accomplish this as a non-profit organization, they need more funding.

Jamie: ‘We are seeking funding sources such as foundations or corporations in the U.S. or the Netherlands. Another priority for funding is to find the money to translate material from Dutch into English. It is sad that there is a wealth of information available in the Dutch language and hardly any in the English language that would help Indo youth to find out more about their heritage. If any of the Indisch 3.0 readers can help in finding funding or professional translation, please contact me via jamies@theindoproject.org.’